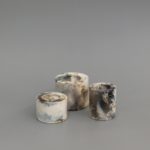 Bio: Strongly influenced by the modernist movement, Graham's primary interest is in creating minimalist forms. He is particularly known for his mastery of a bold red glaze that complements these unadorned shapes. His determination to produce aesthetically satisfying pots drives his ambition to control the ceramic process. However Graham has learned that, unlike wood, clay takes on an impetuous life of its own. A master potter once warned him that after taking meticulous notes and maintaining the most stringent precautionary regime, all his pots would be transformed by the whim of the fire gods. To his joy and sometimes his dismay, Graham has found this to be an absolute truth. Naturally, thanks to the vagaries of the fire gods, each piece will always be unique.

For the most up to date product information, come and see us in the gallery shop,
or contact us on shop@teuru.org.nz or 817 8087.

Enquire about
this item