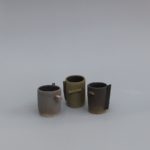 Bio: Stephen studied ceramics under Mike Saul at the University of Sunderland in the North East of England. After graduating he moved to London where he worked part time as a technician at the Tulse Hill Pottery. Subsequently, Stephen moved on to set up a small studio on the Kent coast where he regularly exhibited in the nearby towns of Rye and Folkestone.

Stephen came to live in New Zealand in 2005. He shows and retails his ceramics at a number of local galleries, and has had work exhibited in the Auckland Studio Potters annual and domestic ware exhibitions where he has been delighted to achieve merit awards presented by Campbell Hegan, Barbara Hockenhull and Margret Sumich. Stephen has also had his work selected for the Portage Ceramic Awards in 2015 and 2016 which led to commissions for his work from private collectors. He works from his garden studio in Mount Wellington where he continues his practice involving the exploration of texture and form as informed through the remembered experience of place.

For the most up to date product information, come and see us in the gallery shop,
or contact us on shop@teuru.org.nz or 817 8087.

Enquire about
this item