Surface Movements is an ongoing series of performance art projects that experiment with the format of a surf lesson using a coastal context in association with a nearby museum exhibition. Leading New Zealand artist and former surf champion, Alex Monteith works with local surf schools to provide a free surf lesson, open to people of all ages and abilities. The series aims to provide participants with an experience of the oceanic environment that connects them to local political, economic, cultural and ecological contexts through the involvement of an interdisciplinary team.

On display are custom-made red rash vests, which are used in each performance and are deliberately recycled through multiple events, taking an ecological stance to ‘re-use’ participants’ vests. Each new project also commissions a new set of surf-instructor vests, designed with locally specific information and acknowledgements for those who supported the project.

Surface Movements at Te Uru follows similar projects Monteith has undertaken in Wellington and Tauranga but is the first in her own community. The Piha Surf School team of instructors includes Auckland Surf Champion Zen Wallis, and previous NZ representative in the World Surfing Games, Tane Wallis. 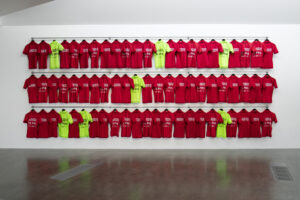 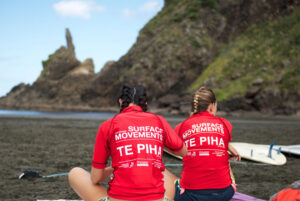 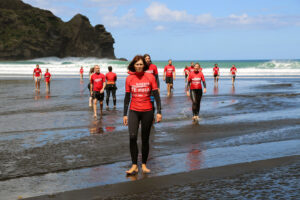