Andrea du Chatenier: The Cell and the Bride

Window displays operate as a portal for the imagination. Much like a museum diorama or the theatre, they suggest a narrative that the viewer is invited to complete. Some of the earliest evidence of human art suggests that people told stories with pictures or carved objects. Narrative art, as it has been labeled, occurs very early in the history of art, in the stories of holy prophets and in a number of Greek and Roman myths that have been immortalised in marble. Following suit, Andrea du Chatenier utilises the gallery window as a stage for her narrative, with a cast of motley characters that could easily be imagined with speech bubbles capturing absurd thoughts infected with melancholy.1

The narrative approach seems especially suited to psychological examination through the investigation of role-playing. If this is the case, what does the work of du Chatenier say about our society? To speak of a visual artist as a teller of stories is a figure of speech, since sculptors and painters do not tell, they show. Du Chatenier shows us a narrative compressed into a single scenario that taps into our contemporary unease about the world we live in.

The drapes of du Chatenier’s world have been lifted and the scene displayed in the gallery window is an artist’s cell. As a self-contained world of creative endeavor the window may either be likened to a hermit’s cave or a prison. There are only the bare necessities: a toilet, hand basin and a few sticks of furniture. In the most spartan of environments, the artist enacts some form of creativity. Perhaps this is the grotto hinted at in a previous group exhibition Grottos, Shrines and Sacred Spaces.2  Housed in a stripped-down temporary art gallery setting, living an ascetic existence, the protagonist sits and constructs a garment for his beloved, a dress for the pretty little rat with whom he co-habitates.

Embedded in the tableau is the story of our innate drive to be creative, to construct, to manipulate and to signify our presence in the world through what we make and what we do. The sub-plot of the story is of our human aloneness in the universe and our longing for interspecies communication. But like all our communications with others, it is always on our terms, in our language, and reflective of our own desires.

In the adjoining gallery space next to the window, du Chatenier shows a new body of work. Once again she uses the format of a narrative, but rather than the filmic still of a window display, it is a world reduced to the scale of a table top diorama. Wilderton is a landscape constructed of clay figurines pop-ulated with humans and animals, observation towers, tree stumps and automatic weapons. Swans swim in ponds of black oil.

Wilderton maps a psychological landscape drawn from both our historical human anxieties and from popular culture. While the bleak and terrifying expulsion from Eden may be considered a parallel to the anxiety felt by job redundancies in our local economies, the gun has become a symbol of personal empowerment fed to us through film and television as a weapon to avenge the injustices laid upon us.

The figurines are glazed in various shades and textures of black. Many of the glazes have had an additive of silicon carbide which causes the glaze to bubble and crack, disguising the form beneath and creating a scarred and melted surface.

Both the life-size and the table top sculptures inhabit an area between delight and discomfort, providing a familiar scenario in a different setting. Perhaps an alternative reality to the one we live in now, albeit a little on the darker side.

Andrea du Chatenier is an artist and educator. Having studied sculpture at Elam School of Fine Arts, University of Auckland, she obtained her Masters Degree from R.M.I.T. Melbourne and now lives and works in Whanganui. Du Chatenier has exhibited extensively throughout New Zealand and abroad, and her work is held in major New Zealand collections. She exhibited in the Sao Paulo Biennale 2004, and was runner up in the Wallace Art Awards 2007. In both 2010 and 2011 she was short-listed for the Fullbright-Wallace Arts Trust Award.

Du Chatenier’s work is highly theatrical, using devices such as installation, costume, and photography. She takes delight in revisiting old fashioned skills such as taxidermy, shell craft and ceramics to construct her works. 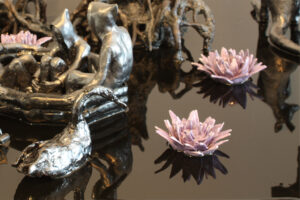 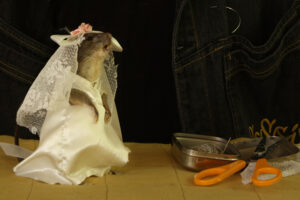