Bepen Bhana has a long-standing interest in the world of pop culture. He has previously incorporated into his work, TV sitcoms such as The Brady Bunch and Family Ties, as well as popular media figures Leif Garrett and Basil Brush. On one level, these projects play on nostalgia, appropriating mass media figures from his own youth, which are also familiar to many viewers. But these cheery references also represent a critical investigation into cultural appropriation and cultural hybridity, which are often underpinned by the demands of consumerism.

For Frankie Goes to Bollywood, Bhana turns his attention to the pervasive idealisation and commercialisation of landscape imagery. Produced in anticipation of his residency at McCahon House from January to April 2016, these large-scale diptych paintings based on photo-collages insert Bollywood film stars into West Auckland scenery. They recall not only European landscape conventions but also the hand-painted billboards produced by filmi grahicwallahs and the use of exotic locations in cinema. In fusing these diverse tropes, Bhana foregrounds the issues of ownership, identity, profiteering and belonging that are embedded in representations of place.

Notably, these works are titled bilingually in both Te Reo Māori and Hindi, paying respect to Tangata Whenua and exploring the possibility for a sense of belonging and tūrangawaewae to be developed for Aotearoa’s South Asian diaspora. 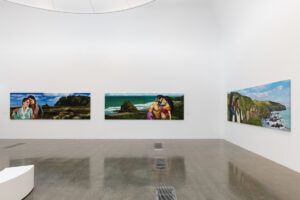 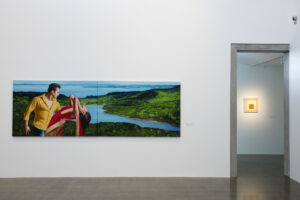 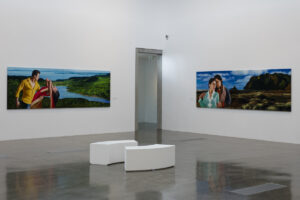 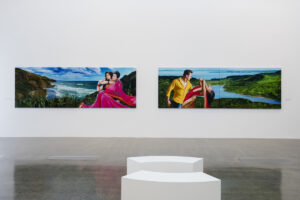 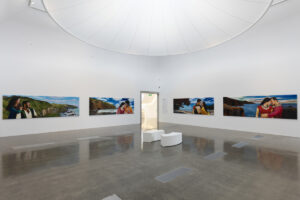 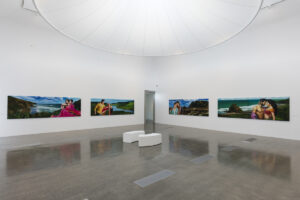