Colin McCahon (1919-87), New Zealand’s most important twentieth century artist, lived for seven years with his wife, Anne, and their four children in a small house at 67 Otitori Bay Road, French Bay, Titirangi. This exhibition of work made during these years celebrates the preservation and restoration of the French Bay house, and the inauguration of the McCahon Arts Residency established in his honour in a specially designed studio and apartment on an adjacent section. Both projects are the fulfilment of a decade’s planning by the McCahon House Trust.

McCahon’s artistic output in this period represents a distinctive and discrete phase of his great career of more than 40 years, clearly delineated both from what preceded and what followed it. He was 33 when he moved to Titirangi and 40 when he left; the Titirangi years were thus a mid-career episode, and a watershed both chronologically and stylistically.

When McCahon moved from the South Island, where he had previously lived and worked, to take up a job at the Auckland City Art Gallery, he discovered a new and stimulating environment, especially once he acquired the French Bay house amongst the regenerating kauri forest of the Waitakere Ranges and close to the pohutukawa-fringed reaches of the Manukau Harbour. He discontinued the figurative Biblical paintings that had occupied him in the period 1946-52, and his approach to landscape painting also changed. To an artist so sensitively attuned to his physical surroundings, a radically new landscape inevitably led to corresponding changes in his art. Also, McCahon was working through new painterly ideas deriving from his study of Cubism, stimulated by a visit to Australia in 1951. His early Auckland series — painting in series was itself an innovation in his work — such as Towards Auckland, Manukau, Kauri, Titirangi and French Bay are bursting with vitality and fresh ideas — new subjects, new techniques, new ways of organizing space — and convey his enthusiasm for his new locale of bush and harbour. McCahon also experimented during these busy years with “written paintings” (eg I AM, 1954), lithography (eg Kauri Tree, 1954) and abstraction (eg Painting, 1958).

From April to July 1958 McCahon, accompanied by his wife Anne, spent four months on a Carnegie grant in the United States, visiting dozens of museums and galleries. Striking changes — in scale, medium, materials, subject matter, style — are evident in his work after his return, especially in an outburst of productivity between November 1958 and August 1959, much of it collected in two remarkable exhibitions in Christchurch in 1959, The Wake at the Canterbury Public Library and Recent Paintings at Gallery 91. The Wake, one of his largest works, is exhibited here as McCahon intended on the four walls of a separate room, the 16 tall unframed panels being (in his words) “… an attempt to create a new environment and a quite new visual experience”.

Handwritten texts of the nine parts of John Caselberg’s poetic lament for his great dane, Thor, are interspersed with panels vividly depicting kauri trees from the Titirangi environment shared by poet, painter and dog. Equally original was the impressive Elias series, represented here by the Elias triptych. In this series McCahon returned to the Biblical themes of earlier work, but instead of treating the theme of Christ’s crucifixion and resurrection narratively and figuratively as before, he did so through expressively treating the words of the Bible. Other paintings from this marvellous year — the intriguing number paintings Two and Three, the exquisitely painted symbolic landscape Cross and the moving tribute to his collaborator Caselberg in John in Canterbury — represent some of the many facets of this great creative flowering.

The post-American work demonstrates that McCahon had finally transcended the locality that had sustained his work so productively for seven years. As he said in 1972 of a work he called The last Titirangi painting: “This theme was finished, and let me go”. Early in 1960 the McCahons left Titirangi and moved into Auckland City. The Gate series of 1961-62 would inaugurate yet another new phase of his extraordinary artistic career.

The exhibition is proudly sponsored by The Trusts, ASB Trusts, Hesketh Henry and Wattyl Paints. 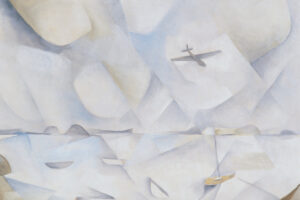 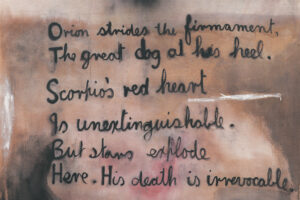 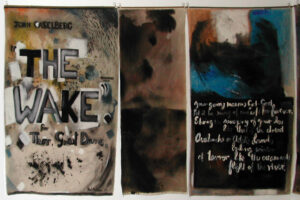