We’re delighted to announce our new Collection Classics series: a revolving display of timeless works from important collections around the country. This series offers visitors the opportunity to experience first-hand works of major renown and art-historical significance, but seldom seen outside of their respective collection premises.

Private collectors have a big role to play in the patronage of artists. In this edition of Collection Classics, we look at how the interests of two local private collectors, with backgrounds in science and education, might inform their collecting sensibilities. For example, this exhibition features works by Garth Tapper (1928-1999), an important figure in New Zealand’s art history, who was not only known for his own figurative paintings, but also as an influential teacher, teaching at secondary school level in Auckland from 1953-1960 then lecturing at Elam for 17 years before retiring to paint full time.

Linking the recent work of Julian Hooper with the surreal, abstracted landscapes and figures of Michael Illingworth, this showcase comes from the collection of the James Wallace Arts Trust. As well as running Pah Homestead, the Wallace Arts Trust loans out artworks to over 50 institutions to expose as wide a range of audience to contemporary New Zealand art as possible.

Some of the most interesting art collections are the works that are accumulated by artists over the course of their careers. They tell us about the artist’s interests, influences, networks and also indicate works of their own that are highlights or of personal significance – the keepers that the artist has decided to hang onto. This selection comes from the collection of West Auckland painter and designer Roy Good. They demonstrate an ongoing engagement with the overlapping fields of abstraction, illusion, geometry and graphic design.

Good’s collection includes prints, painting, pottery, sculpture and posters by Gordon Walters, Gretchen Albrecht, Barry Cleavin, Theo Schoon, Josef Albers, Marte Szirmay, Ron Left, John Panting, John Parker, Patricia Perrin, Warren Tippet, Michael Kitson and Victor Vasarely. Among these is a community of local abstract painters, including Gretchen Albrecht, Mervyn Williams and Geoff Thornley, who at one stage lived next door to Good. Many of these artists, along with Walters and Schoon, were also part of the Petar/James Gallery, which represented some of New Zealand’s most important pioneers of abstraction in the 1970s.

Also apparent in this selection is Good’s background as a renowned designer, notably producing logos for South Pacific Television in 1975, the New Zealand sesquicentennial logo in 1990 and the New Zealand pavilion logo for the 1992 Seville World Expo. Featured in this selection is a sculpture by another designer-artist, Logan Brewer, who had a similar reputation, starting out as a theatre designer in London in the 1960s, later designing New Zealand pavilions for Expo 88 and 92, and displays for Auckland Zoo, Kelly Tarlton’s and the Maritime Museum. This sculpture was first shown at the Barry Lett Galleries in May 1973 in a joint exhibition with Good and demonstrates their shared interest in geometric play and composition.

Our latest Collection Classics showcase pairs Jacqueline Fahey and Dick Frizzell with two works loaned from the Fletcher Trust Collection. Both artists taught painting at Elam, together with Don Binney and Robert Ellis. And both make work that challenges hierarchies, favoring everyday, ordinary and domestic subjects. The Jacqueline Fahey was originally purchased in 1972 by painter Doris Lusk before being acquired at auction by the Fletcher Challenge Art Collection after Lusk’s death in 1992. One of New Zealand’s major corporate collections, the Fletcher Trust Collection began in 1962 when auctioneer Peter Webb persuaded Sir James Fletcher, as he is now known, and Managing Director of Fletcher Group Services, George Fraser, to purchase five nineteenth century watercolours by J.B.C. Hoyte.

Painter and sculptor Gretchen Albrecht is one of New Zealander’s pioneering abstractionists. This exhibit presents two works that use horizontal washes of colour to evoke the natural landscape, including one painting made while Albrecht was living in Titirangi in the early 1970s. The works have been kindly loaned by The University of Auckland Art Collection, which holds major works by significant New Zealand artists and offers an invaluable resource for students and researchers.

This edition of our Collection Classics series pairs two leading international figures of abstract painting, Josef Albers (1888-1976, Germany) and John McLaughlin (1898-1976, United States of America). It is rare to see paintings of this nature in the flesh in New Zealand, allowing us to appreciate their finely nuanced surfaces. These two paintings come from the J.B. Gibbs Trust Collection, an important Auckland collection of New Zealand and international works. The Gibbs collection has significant holdings by artists including Gordon Walters, Colin McCahon and Ralph Hotere, a strong focus on monochromatic works, and includes many pieces with connections to Titirangi or the West Coast. As well as acknowledging the important resource created by private collections such as the J.B. Gibbs Trust, this showcase marks the 40th anniversary of the passing of these two important artists; McLaughlin on 22 March 1976 and then Albers a few days later on 25 March.

To inaugurate our Collection Classics series, we are showcasing two Don Binney paintings generously on loan from the Auckland Art Gallery Toi o Tamaki collection. Auckland’s Waitakere Ranges was a recurring reference point for Binney, who often depicted local scenery and birdlife. In particular, the two selected works portray the pīpīwharauroa, or shining cuckoo, in close proximity to the Te Henga coastline and a tui flying above two young kauri trees respectively. Together, these paintings foreground Binney’s ongoing concern with painting as a platform to consider our relationship – both environmental and spiritual —to place. 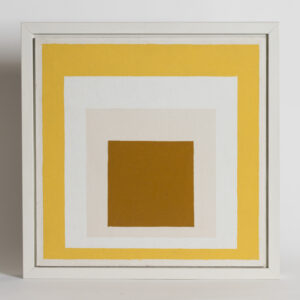 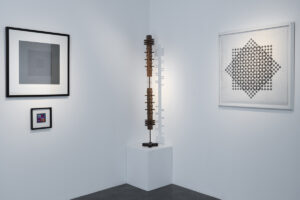 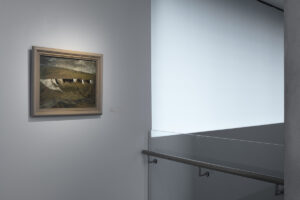 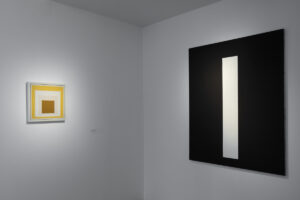 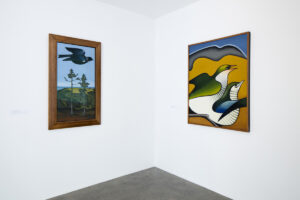 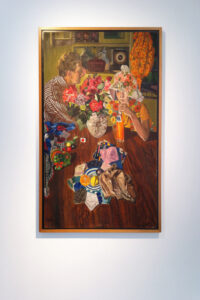 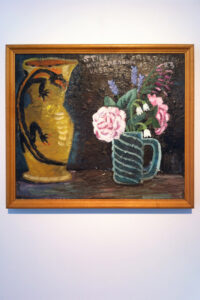 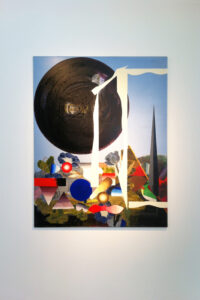 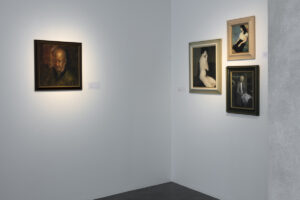 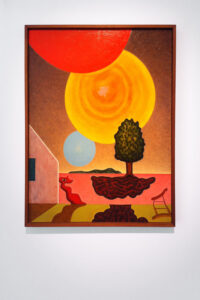