For Plastic Mouthfeel III, Dan Arps revisits a series of objects made during his McCahon House artist residency, which he undertook from March to May 2014. Arps describes the work as responding, in part, to the physical environment and pyscho-geography of West Auckland’s suburban fringes. Household goods are configured in response to the stacking and layering that is typical of Titirangi’s stratified native bush and architecture.

In amongst the bricolage of sculptural objects — which range from a ripped foldout chair to polyurethane cast planters and strewn tarpaulin— is a perceptible network of re-making and re-use that challenges our assumptions about objects and materials. Found or bought items have been re-worked; present too are forms that have been repeated as multiple casts, with even the mould included somewhere close by. The installation then might also be read as a site of studio production transported into the gallery space, where the nature of goods are continuously being tested, re-considered and reiterated. Here, objects act simultaneously as extant commodities as well as material that can be modified or multiplied, destabilising artistic and commercial ideas of the ‘multiple’ and the ‘original’, the ‘sequel’ and the ‘new’. 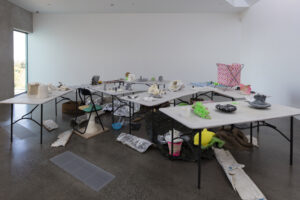 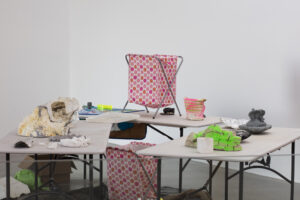 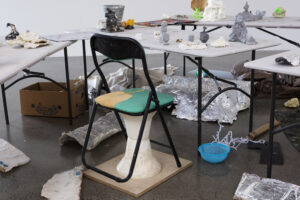