In Good Form: The Abstract Art of Roy Good

Roy Good’s paintings are, without exception, instances of modernist abstraction. They are consistently inventive deployments of the ‘building blocks’ of painting – shape, colour, line, space. This survey exhibition, spanning the years from 1968 – 2007, reveals the level of invention and aesthetic and painterly thinking embodied by Good’s paintings. Good’s significance as a New Zealand abstract painter is reflected in his involvement with the Petar/James Gallery run by Petar Vuletic during the 1970s, and in the critical reception of his work. Early on, Gordon H. Brown recognised the significance of Good’s Triangle Suite, exhibited partially in 1972 and more fully in 1978, and noted as exemplary of New Zealand abstraction by Brown and Hamish Keith in their 1982 edition of An Introduction to New Zealand Painting 1839-1980 (a publication that was otherwise critical of what the authors dubbed ‘pattern painting’). Good is also significant as possibly the earliest and certainly the most consistent New Zealand exponent of ‘shaped’ paintings. Further, Good’s work is notable for having absorbed into his particular aesthetic, aspects of both European modernism (particularly those in which painters engage with architecture, as in De Stijl, the ‘Architectons’ of Malevich, Constructivism, and the work of Max Bill) and American abstraction.

A retrospective survey of Good’s painting career is timely insofar as his most recent work revisits features of his earlier paintings, specifically the ‘notched’ canvases of 1974. There is a looking back, then, to the building blocks of Good’s own painterly development, and an attempt to, as it were, push those forms further – to push at the sense of stability and unity of the earlier ‘notched’ paintings and of painting itself, to play about with the forms from which those earlier works were methodically built.

This continuity between Good’s early and new paintings lends a sense of framing and coherence to the exhibition. The exhibition is accompanied by a substantial 72-page catalogue including colour reproductions of all works in the exhibition, and a text by the curator, Dr Edward Hanfling. Good has had a distinguished career as a designer parallel to his career as a painter. The exhibition, and catalogue essay, emphasise the overlaps between Good’s work in these disciplines – and construe his paintings as a form of productive ‘conversation’ with the field of design and architecture.

Abstract art, still, is difficult for many people to relate to. It is hoped that this exhibition will reveal the extent to which abstract paintings can be seen as inventive, full of thought and of the sensibility of the artist, and exciting – visually dynamic, varied and engaging.

A comprehensive 70-page catalogue was published with this exhibition, including 46 colour plates and essay by Ed Hanfling. 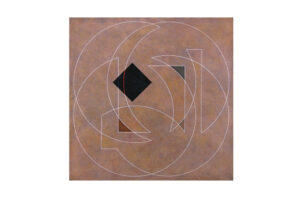 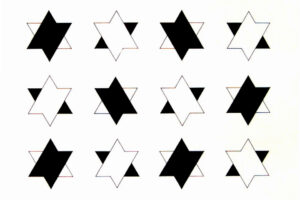