Karekare is one of those magical places with the uncanny ability to capture your imagination, your spirit, and your breath. Anyone who has spent time wandering along the wild west beaches between the pounding breakers and the rugged Waitakere Ranges will be familiar with the sense of power and awe this coastline exudes. One man knows that feeling and place more than most.

From his home and studio, which he built himself, Madden has observed and recorded the ever-changing patterns of Karekare’s muscly landscape and moody weather. In a manner reminiscent of his teacher and friend, Toss Woollaston, Madden applies his paint with energy and passion and on a scale that befits the imposing West Coast landscape. And like Woollaston, he labours his brushes to capture a powerful array of contrasts – light and shade; mass and space; turmoil and calm.

In this new collection of paintings Madden presents vistas from the Paraha Valley, Zion Hill, Te Ahu Bluff, the ‘Bad Lands’ marshes and more. These are not picture postcard views of Karekare, but wonderfully expressive tributes to the wild, brooding, heroic landscape that inspires this artist. 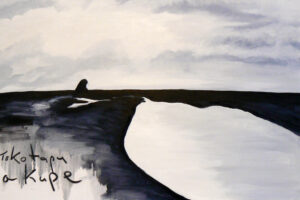 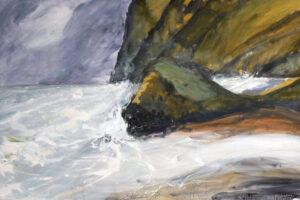