Every now and then an artist appears who has the rare ability and passion to capture a particular place in such a unique way that the place and the paintings become locked together in our memories.

Once you’ve had the treat of seeing a Siddell painting with its characteristic mown grass volcanic cones; inviting colonial architecture and impressive big-sky clouds, it’s hard not to catch glimpses of ‘Peter’s Auckland’ everywhere. Not Auckland 2011, but a place caught in another time. It’s as if the artist is inviting us to look through a window into his own special memory of a city he has lived in all his live, a place he has fondly observed and reflected upon again and again.

For those of us who live out West, Peter’s paintings have a special familiarity and resonance. A recurring view in Peter’s works is looking westwards towards the Waitakere Ranges, often displaying the dramatic lighting at dusk as the sun leaves the day. Karekare too has been a much loved haunt for the artist and his family and in the exhibition we are fortunate to be able to show the magnificent Karekare panels consisting of five large panoramic works: Karekare (pictured above), Ohaka, Zion Ridge, Pararaha & Whatipu, painted in 1990.

In recent years both Sir Peter and his wife, artist Dame Sylvia Siddell have been very unwell so we are particularly grateful to them and their family for making this exhibition possible. 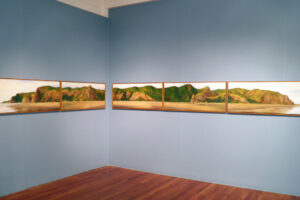 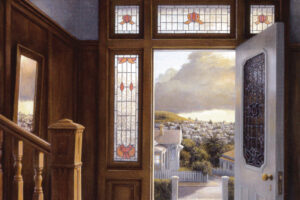