This project comes at a unique time in the gallery’s history, as it transitions from its off-site location in New Lynn back into a purpose-built venue in Titirangi. Ryan Ballinger’s performance will symbolically herald this return. The project includes the video Ankles Tied, which will screen in New Lynn and pays homage to Richard Serra’s early set of black and white video works in the late 1960s, one of which was entitled Hands Tied. In Titirangi, a public sculpture will be installed above the street in front of Lopdell House, called Runners High. Connecting the two sites, the performance, Trust Exercise #1, will explore the trust relationship between artist and art gallery revealed by his physical engagement with public space through the action of running as a performative art practice.

Trust Exercise #1 is based on a run from Lopdell House Gallery’s off-site location in New Lynn to Lopdell House in Titirangi. The run is a kind of closing ceremony for the time the gallery has spent in New Lynn and is reminiscent of Ballinger’s running performance at the Govett Brewster Art Gallery in 2013 as it closed its doors for renovation and expansion.

However, there is a strange twist to this performance – not being a West Aucklander, the runner will have no idea where he is going. Guests are invited to witness the runner’s journey from Lopdell House via a live feed as he is directed by walkie-talkie on how to get to the finish line. Guiding the artist is the project curator, in complete control over the duration and route taken by the artist to reach the finish line. As the title suggests, this trust exercise highlights the relationship between artist and gallery curator, showing how important each role is to the field of art.

Marking the 30th anniversary of Paul Ballinger’s marathon record, Ryan had a treadmill installed for the exhibition ‘Poetry in Motion’ at Auckland’s Saatchi&Saatchi Gallery, where he performed ‘Indoor Record Attempt #1 (Fukuoka revisited)’. This was an attempt to run on a treadmill for 2hrs 10min 15sec to see how many kilometres  could be completed compared with the 42.2km his father completed in that time at Fukuoka 30 years earlier. After a year of training, Ryan completed 33km, still 9km out from the record. This work was the beginning of a series of annual record attempts. The second attempt, held in Newmarket’s Development AIR gallery, included a 2.5km loop around the Auckland War Memorial Museum and back to the gallery for 2hrs 10min 15sec. The resulting 23km, Ballinger admits, was due to a lower level of fitness and the long uphill incline, combined with that day’s intense wind. 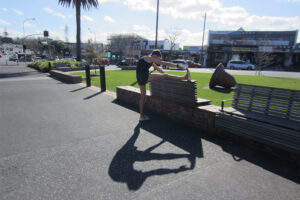 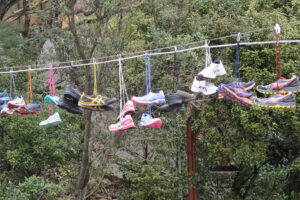