Ornamental Residue originates from a study into the typology of brooches. For this series, Melbourne-based jeweller Manon van Kouswijk applies a range of processes and abstractions to iconic brooch forms and motifs from the history of jewellery. These brooches are formed by pouring liquid clay over a series of tightly grouped spherical forms, leaving an inverse of her original creations – a residue of her processes made wearable.  This sequence of evolving spheres evokes a beauty familiar in scientific progressions and forms found in nature – splitting cells, flowers, stars and snowflakes.

Manon van Kouswijk is a Dutch artist and contemporary jeweller who lives and works in Melbourne, Australia. She studied at the Gerrit Rietveld Academy in Amsterdam, The Netherlands, where she was the Head of the Jewellery Department before relocating to Australia in 2010. Her work has been exhibited in galleries and museums internationally and is part of private and public collections worldwide including the Stedelijk Museum, Amsterdam; Musée des Arts Décoratifs, Paris; the National Gallery of Victoria, Melbourne; Victoria & Albert Museum, London. 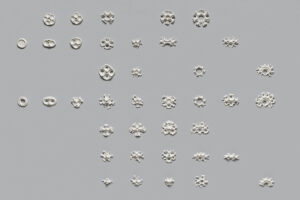 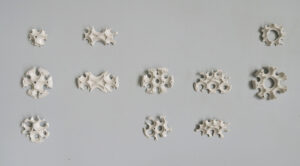 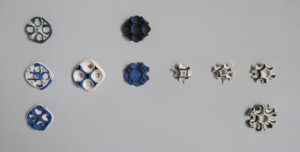