Stanley Palmer: To the Harbour

Highly revered painter and printmaker, Stanley Palmer, has produced a stunning collection of monoprints based on his childhood recollections of the Manukau Harbour. Capturing the time and place with his evocative story and illustrations, the resulting beautifully crafted book is part children’s book – part memoir.

Printmaker and painter Stanley Palmer has been exhibiting since 1958 and worked as a full-time artist since 1969.

While most of Palmer’s works have specific locations, his vision has always been deeply personal. Conservation of New Zealand’s coastline and off-shore islands has been one of his concerns for many years and he often spends long periods of time working in remote areas of the country; areas that to him represent a kind of authenticity of mankind itself. Throughout his work Palmer asserts the potency of the island landscape as a metaphor for ourselves, suggesting it “reflects our own experiences and perceptions, as well as the inherent fragility and isolation of living in a country surrounded by a vast ocean.”

By looking closely at his environment, Palmer teaches us to also look at it, and by extension, at ourselves: “I am interested in a lot of things at the end where the road peters out, the edge between the civilized and where we have no control. . . the oceans and the sky.”

This exhibition is presented as part of ‘Cover Story,’ the Going West Literary Book Festival 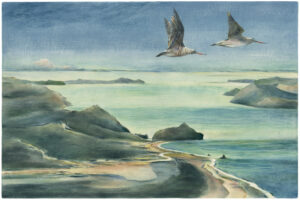 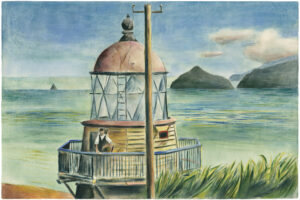