Weilun Ha: Gods of the Forest

An ‘East meets Westie’ encounter as the Window Project Space is transformed into an architectural ‘bush walk’ that unites traditional Asian ink landscape techniques with the flora and fauna of the Waitakeres, focusing on the iconic kauri tree. Eleven percent of kauri trees in the Waitakere Ranges have already been wiped out by the kauri dieback disease, and with government funding now under threat, the kauri could be extinct within decades. Weilun Ha’s message promotes advocacy for the mighty tree which he sees as a treasured part of our heritage and in the land he has adopted as home.

At a young age Weilun was privileged to study under a Lingnan master of traditional Chinese painting, upholding a cultural tradition losing popularity within his generation. His artwork has appeared weekly in the Chinese Herald, he was a finalist in the Wallace Awards 2012, and won the Waitakere Central Community Arts Council Landscape Awards 2012.

Listen to the Radio New Zealand interview with Weilun Ha as part of 'Arts on Sunday,' 1 September 2013: 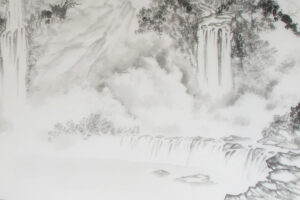 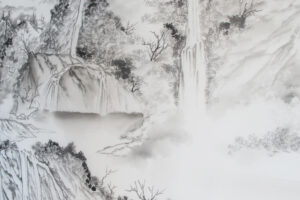