Lopdell House began life in 1930 as Hotel Titirangi. Designed by Shortland Street architects Bloomfield and Partners, the building was originally envisaged by the main shareholder to be an impressive 4-storied monument, with colonnades and courtyards. Upon completion, a less embellished hotel was opened on 20 November 1930 by former Prime Minister Gordon Coates in a glittering stylish occasion, in spite of the fact that the Hotel failed to gain a liquor licence and was soon dubbed ‘The Pub with no Beer’.

Throughout the Hotel’s existence, it was plagued by difficulties through low patronage, lack of a liquor licence and then the Depression. In the late 1930s, with a slight increase of traffic, a nightclub was opened and run by NZ personality of the time, Nero (Mr Silver). The club featured singing, supper, music and dancing. Unfortunately, this was short-lived with World War II removing the rest of the patronage.

In 1942 the building was passed on to the Department of Education to use as a School for the Deaf, beginning the premises’ 40 year association with education.

The hotel was renamed ‘Lopdell House’ in 1960 after the Superintendent of Education and became the first centre for Teacher’s in-service training, providing a venue for week-long courses. The building was vacated in 1982 and purchased a year later by Waitemata City Council, to become the Waitemata City Arts Centre. This opened in 1986 and was managed by Lopdell House Society.

Lopdell House Society continued to operate an art centre (renamed the Waitakere Arts and Cultural Center and then Lopdell House Gallery) from Lopdell House until 2012, when the building was closed for earthquake strengthening, refurbishment and the construction of a new, purpose-built gallery building.

The Lopdell House Development Trust was established in 2002 to address the need to upgrade and extend Lopdell House in order to meet new building code standards with seismic strengthening, accessibility, as well as contemporary museum standards. The hearing process for resource consent for this development was rigorous, with all possible points of view aired before resource consent was granted.

In 2004, Mitchell & Stout Architects were commissioned to produce concept drawings for the redevelopment of Lopdell House. Independent consultants have advised on gallery design, geotechnical conditions and seismic upgrading of the present building. A full site survey was carried out and boreholes drilled to assess site conditions. The brief was driven in part by the needs of the community and in part by the potential and limitations of the existing building and site.

Mitchell & Stout were responsible for transforming the former BNZ building into Tauranga Art Gallery. They were awarded an Architecture Award for the Waikato/Bay of Plenty region in the Public Architecture category for this project. In 2014, they represented New Zealand in the Venice Architecture Biennale.

From 2012-2014, Lopdell House Gallery ran offsite and outreach programmes from temporary premises in nearby New Lynn.

The refurbishment and earthquake strengthening of Lopdell House was completed in March 2014. More than 1500 people attended a public open day on 1st March. Te Uru administration still resides in Lopdell House, where we share the heritage building with the other Lopdell Precinct tenants, including McCahon House, Titirangi Theatre and Upstairs Art Gallery.

On completion of the new building, Lopdell House Gallery was renamed Te Uru Waitakere Contemporary Gallery and opened to the public on Saturday 1 November 2014. The new building gives us purpose-built workshop and storage spaces, an education area, five galleries, and room in the entrance for our ever-popular shop. It also provides good practical solutions to pressing problems including: barrier-free access; climate controlled exhibition and storage space; and a safe and secure loading dock area.

With this increased capacity, Te Uru is able to provide world-class art experiences as West Auckland’s regional art gallery, supported by the Waitakere Ranges Local Board of Auckland Council. 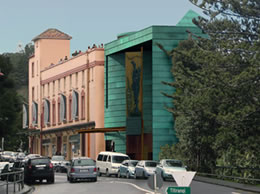 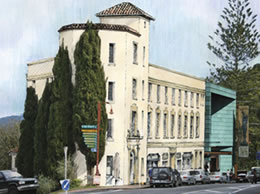