The gap between a railway station platform and the train’s boarding step is a dangerous space, as Adrian Jackman observes from his studio window which takes in a suburban Auckland train station. Gaps have at one time or another invoked fear in most of us, whether it be cracks in the pavement, the gaps between domestic decking floorboards, and even the gaps a painter must negotiate in constructing a composition.

Adrian Jackman’s new series of paintings, Mind the Gap, is an investigation of the agricultural technique known as circular irrigation, which when seen via satellite imagery, resembles a phenomena. Honing in on the earth’s surface through internet-based applications such as ‘Google Maps’ is a technology that has attracted millions of internet users.

The quality and amount of visual information in this form of photography varies considerably, often forcing our imagination to postulate on what lies in the ‘gaps’ between clearly visible objects. For the painter, such a lack of visual information represents an age-old opportunity and challenge that exists within the medium: to convey the available information accurately and fill in the gaps successfully, without overdoing the painting entirely. 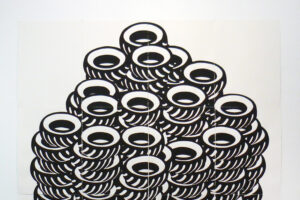 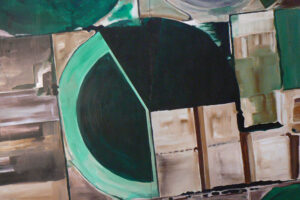